Mrs. Abanum Chidi, an auxiliary nurse, who has been parading herself as an eye surgeon and making a living through deceit has been arrested.

Nurse Abanum, a member of staff of Central hospital Warri was a theatre assistant in the government owned-hospital.

But under cover, she was operating as an eye surgeon in in the same hospital.

Her bubble, which burst recently stemmed from an ill-fated eye operation she did for a patient, Mr. Gift Aruokpere, who happens to be husband of a Magistrate.

The botched operation put Mr. Aruokpere in danger of losing his eyes leading to the nurse’s arrest by the Delta State Police Command after a complaint was lodged by the management of the hospital and her victim.

Andrew said,  “Yes a nurse by name Mrs. Abanum Chidi, of central hospital Warri, who is not even a surgeon, clandestinely used the operations room of the hospital and operated on the eye of one Mr Gift Aruokpere, of 150 Airport road, Warri on May 2018, and it resulted in serious complications”. 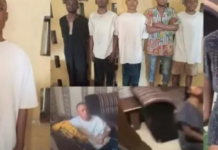