The fabrication making round on online media platforms and soft-sell magazines on succession tussle involving Access Bank’s Group Managing Director, Aigboje Aig-Imoukuhede and his longstanding friend and partner, Herbert Wigwe, the current Group Deputy Managing Director, has been discovered to be untrue. Our investigation has revealed that Herbert Wigwe will assume leadership at the Bank upon Aigboje’s retirement.

In the report copied from the social media and prominently published by Leadership Newspaper on Monday, April 15, 2013 titled “Success Tussle Hits Access Bank” purported that the Bank’s Group Managing Director, Aigboje Aig-Imoukhuede favours one Angela Omokore, a General Manager in the Bank over his Deputy of over 10years, Herbert Wigwe as a successor to the position of Group Managing Director after his retirement.

The falsehood, propagated by some online media platforms and soft-sell magazines ultimately published by the Leadership Newspaper with prominence on the front page of its issue of Monday, April 15, 2013, drew the ire of the Board and Management of the bank and necessitated institution of legal action against Leadership Newspapers for the publication which the Bank described as “malicious and embarrassing”.

Similarly, the publication was described as injurious to the persons of Aigboje Aig-Imoukhuede and Herbert Wigwe, the Bank’s Group Managing Director and Deputy Group Managing Director respectively and said to be a total disregard for the Bank’s long-instituted succession plan and the entity called Access Bank Plc. According to a source within the Bank, “The report has the potential of causing unease amongst the Bank’s stakeholders because Access Bank is governance driven institution hence the need for the Board and Management to lay to rest the dirty speculation”.

However, on the strength of existing relationship between the Bank and Leadership Newspapers, the matter was eventually resolved out of court with the Reporter severely punished while the newspaper made an attempt to retract the story in a face-saving manner on Tuesday, April 16, 2013 by publishing a report titled “Fresh Facts emerge on Access Bank’s Leadership Succession Plan” but the content was not acceptable to the Board and Management of the Bank; for the publication did not show that the newspaper erred by publishing a story that was not investigated.

Consequently, Leadership Newspaper published a retraction which showed that it accepted responsibility for the error in its issue of Monday, April 29, 2013 and unreservedly apologised to the Board and Management of the Bank for the embarrassment caused by the publication.

The anxiety created by the story was finally laid to rest by the Bank’s Group Managing Director, Aigboje Aig-Imoukhuede at the 24th Annual General Meeting held at the Oriental Hotel, Lagos on Thursday, April 25, 2013 when he informed of his impending retirement and assured them that the bank will continue to soar after his retirement.

At the AGM, Aigboje Aig-Imoukhuede said “This is my last AGM as the Group Managing Director/Chief Executive Officer of this Bank but I can assure you that your Bank will continue to soar. The choice of a successor has long been settled and I already know who will succeed me as Group Managing Director/Chief Executive Officer when I retire. He is sitting next to me, he is not as tall as I am but we have been on this journey together since 2002. I would not be able to make a formal pronouncement because of regulatory requirements for such at this time. Nevertheless, my successor is sitting to my immediate right”.

Our reporter present at the AGM said the riddle in Aigboje’s speech was not complicated enough to mask the identity of his successor who happened to be Herbert Wigwe. According to the reporter, sitting to Aigboje’s immediate left at the AGM was Mr. Gbenga Oyebode, the Bank’s chairman who is taller than Aigboje while on his immediate right sat Herbert Wigwe, the Bank’s Group Deputy Managing Director, who Aigboje is taller than.

The jubilant shareholders who attended the AGM in overwhelming number found the riddle amusing as they shouted “Herbert Wigwe! Herbert Wigwe!! Herbert Wigwe!!! ”, and prayed for Aigboje Aig-Imoukhuede for his contributions to the Bank and efforts at transforming Access Bank into a leading African financial institution.

NEWS orijoadmin - September 20, 2021
0
Bridging the gap to attain sustainable solutions to economic recovery will be the most impactful route to drive lasting and meaningful growth; for this... 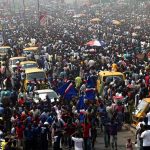 featured orijoadmin - September 20, 2021
0
Fifteen years after the last census, Nigeria is likely to have another headcount next year. This is according to The Nation. It said President Muhammadu Buhari...
Advertisement

41% of Nigerians have HIV — Report