A city in the US, Colorado Springs and Charis Christian Centre are on war path after the city threatened to bar the church from running advertisements using Jesus Christ’s name.

Charis Christian Centre has a long running campaign using Jesus’ name in the advertisements on buses and benches. The controversy ads on about 20 bus stop benches and several public buses say “Jesus is Lord.”

But recently, the city of Colorado Springs in her reviewed of the advertising policies of Mountain Metro Transit told the church that it would be barred if it uses the name Jesus, Colorado Springs Gazette reported.

“The City of Colorado Springs is carefully reviewing the advertising policies of Mountain Metro Transit in light of the advertising by Pastor Lawson Perdue of the Charis Christian Center. 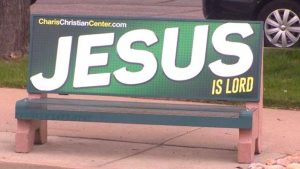 “The City takes First Amendment issues very seriously, and strives to fully comply with Constitutional Law. This commitment requires that advertisements and policies are regularly reviewed for content and legality. Mountain Metro Transit recognizes that it acted hastily in asking Pastor Perdue to change his messaging.

“The city attorney’s office is working diligently to ensure that the advertising policies comply with the law. During this review, no action will be taken and Mountain Metro Transit will continue Pastor Perdue’s advertisement as they currently appear.

“In the meantime, the ads will stay. Whether or not you’ll see them in the future is still up in the air,” the city had said in a statement.

But reports by Fox 31 said Charis Christian Centre is not taken lightly the threat, and according to one the pastor in the church, Pastor Lawson Perdue, “I’ll fight all the way to the Supreme Court if that’s what it takes,” Perdue said.

“I don’t like to fight. I didn’t start this one, but I’ll finish it.