Weird showbiz personality, Denrele Edun, has injured himself during a movie shoot he is cast in on Monday.

The comedian who posted a video of the incident on his Instagram page said he suffered the ugly fate while trying to make his acting more convincing.

He said: “They say that true artists suffer for their craft, but perhaps no artist has suffered like myself on this hustle of mine!

“All in a bid to make my acting more convincing, I was supposed to drop into a faint in the very first scene of the movie ‘PEPPER SOUP’.

“I guess I miscalculated and fell hard on a metallic object on the floor that pierced my face. I kinda blacked out for a few seconds and felt something warm running down my face.

“Truth is, a blood vessel just a lil above my right eye (an inch away from my eyebrow bone) was burst open and it was hard to control the bleeding! 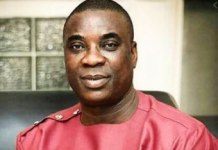