Wife of Dr. Adewale Adejoro, one of the medical personnel in First Consultant Hospital that contracted Ebola through their contacts with Liberian Patrick Sawyer but survived, Mrs. Opeyemi Adejoro, has been delivered of a baby girl.

Mrs. Adejoro gave birth on Tuesday, December 1, 2015 at First Consultant Hospital. Announcing the birth via a statement, the hospital’s Medical Director, Dr. Benjamin Ohiaeri, said the baby was born at 7:24p.m, and certified free of Ebola like her parents.

It would be recalled that on November 3, 2015, the only female doctor that survived Ebola outbreak in First Consultant Hospital, Dr. Ada Igonoh, gave birth to a healthy baby girl in United States. 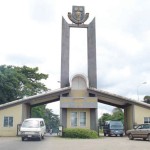 NEWS orijoadmin - January 19, 2021
0
The Senate of the Obafemi Awolowo University, Ile-Ife, OAU, has announcement its cancellation of the 2019/2020 academic session. The session had been suspended since last...

featured orijoadmin - January 19, 2021
0
Report that Omotola Jalade-Ekeinde and the National Chairman of the All Progressives Congress, APC, Comrade Adams Oshiomhole are under the radar in sizzling romance...