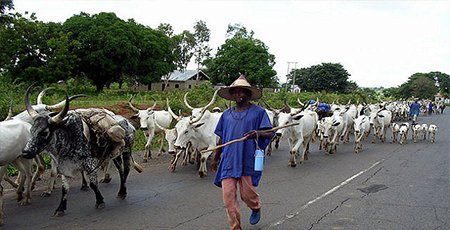 A former president of the umbrella body of the cattle breeders, Miyetti Allah Cattle Breeders Association of Nigeria (MACBAN), Alhaji Bello Ardo, has said that the organisation will sue Gov. Ayodele Fayose over his ban on cattle grazing in Ekiti State.

Alhaji Ardo, who happens to be President Muhammadu Buhari’s son-in-law made this threat while reacting to Fayose’s order to hunters of Oke-Ako community in Ikole Local Government Area, where suspected herdsmen killed two residents last Friday, to kill Fulani herdsmen on sight, and banned cattle grazing in Ekiti State.

Fayose had said: “From now on, my government has banned grazing in Ekiti State. If you want to graze, it should be in your local ranches.

“Any cow seen around should be seized and it would henceforth become government property and their owners shall be prosecuted.

“On no account should anybody come to sack our communities again, rise up against them.

“I am giving you this order before they kill you kill them. You have to defend yourselves. Before they get you, you must get them down and take them out.

“You should pursue them, go and search for them inside the forest. Anyone who comes to take your life, you must take them out.”

Reacting to Fayose’s outburst, Alhaji Bello said Fayose was inciting hatred for Fulanis, adding that his ban on cattle grazing in Ekiti State would not stand.
He said: “He does not have the authority to ban cattle-grazing in Ekiti. Fulani will challenge it in court.

“He does not have the right to say that Fulani cannot rear cattle through the forests; we are going to challenge this in court.”