A group, Visioners for New Lagos (VNL) has hit out at the Oba of Lagos, Oba Rilwan Akiolu for endorsing Mr. Akinwunmi Ambode as the All Progressive Congress Lagos gubernatorial candidate in the 2015 election.

The political group, which claimed it has been vindicated by the unguarded disposition of the “phantom Lagos elders” as represented by Akiolu for which it raised the alarm some weeks ago, said Akiolu had only veered off his brief by arrogating to himself, the right and power to determine who governs Lagos.

Akiolu had Thursday at a book launch said Ambode had been anointed a successor to Fashola in 2015.

Leader of the group, Mr. Bambo Akin-Johnson said when the group drew the attention of the public to the fact that “Tinubu and his business partner, Akiolu had endorsed Ambode as Governor Fashola’s successor some weeks ago, Tinubu had denied in a press statement, forcing many undiscerning to think it was a typical political ranting.

“But today, that would no longer be an issue. That they have come out of their hiding is good for us. It has vindicated us and exposed them. It shows there is more to this satanic endorsement than meets the eye. Unfortunately for them, they have made their antics known early enough and the better for the challenge ahead,” he said.

The group which insisted it had no problem with Ambode aspiring to be governor of the state, but must emerge through a credible process added that “if Akiolu could stoop so low as to jettisoning every known decency and honour attributable to monarchical institutions, then he should be ready to live with the consequences of his actions.

“The monarch has clearly out-stepped his bounds; he has bitten more than he can chew and has taken more than he really can contain. He has stepped on the sensibilities of the electorate by usurping their rights to choose through their votes, their choice governor.

“If Akiolu wants to play politics, he should take off his royal robe and prepare for a dog fight by stepping on the arena? To think it is part of his role as a traditional ruler to determine the choice of a democratic governor because he and his business partner want to appropriate the state is a dream that will never be reified, not in 2015 or thereafter.

“It is particularly shameful that a Lagos Oba of his level would come down to such a level to run errands for phantom elders all in the name of economic survival. Has God not been good enough to a man who was not originally from any of the royal families in the state to be made the Oba of Lagos? But now, it is obvious they want to make this state a haven for non-indigenes and milk her resources and even bequeath it to their cronies.

“Need we say that we have had it full and that this is the final straw to this embarrassment called the Lagos Oba and his co-travellers, who now see Lagos as their enterprise? Since Ambode merits the job because he is the best accountant they have ever seen, why not redeploy him to Alpha Beta, where he could help manage the extension of Lagos wealth which is being diverted.

“We will fight this monster of a leadership and Lagos elders and put a final stop to their extremism. Since they have chosen to step out naked in the cold, we would not honour them by offering a covering. At their level and status, they should be left to face the consequences of their greed typified by palpable inanity. We insist, Lagos is not the property of anyone person or group but a collective heritage that we will all protect with our very last. Let Akiolu and his partners be warned.”

Why I dumped Tinubu’s campaign —Jibrin 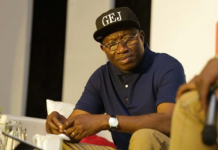