Sahara Reporters publisher, Omoyele Sowore, and convener of the RevolutionNow Protest detained over allegation of attempt to topple the President Muhammadu Buhari’s administration, has denied the charge in an affidavit his lawyer, Femi Falana, filed before the Federal High Court in Abuja.

In it, the presidential candidate of the African Action Congress, AAC, expressed shock at the allegation levelled against him wondering how the protest amounted to plot to overthrow Buhari’s government, saying the president himself on many occasions before he took rein of office in 2015 led protests march against previous administrations from late Umar Yar’ Adua, Olusegun Obasanjo to Goodluck Jonathan governments and none threw him behind the bar for exercising his right to protest.

Sowore also recounted how the National Chairman of the All Progressive Congress, APC, Comrade Adams Oshiomhole during Obasanjo’s time as President while he was a labour leader led a protest march against removal of oil subsidy by the administration without his action being criminalised by the power-that-be then.

In the said affidavit, deposed by a lawyer in Falana’s chamber, Abubakar Marshal, Sowore revealed that he is a battling an excruciating ankle injury which he suffered during his arrest on August 2 and need medical attention.

The affidavit partly read: “That the Respondent / Applicant needs treatment on his ankle which was seriously strained during the midnight invasion of his abode on the said Friday 2nd August 2019 by the armed agents of the Applicant/Respondent.” 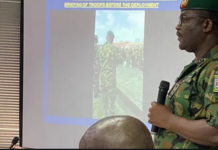