Nollywood actress, Iyabo Ojo, on Wednesday took to her facebook to alert her fans and friends that she would not be using Iyabo Ojo films Production as her movie production name.

Rather, the top Yoruba actress said the name would now be Fespris Production.

Her word: “I will be dropping the name ‘Ojo’ soon”.

It would be recalled that another actress, Fathia Balogun recently dropped her estranged actor husband’s name, ‘Balogun’ and now bears her maiden name, ‘Williams’ following a legal battle. 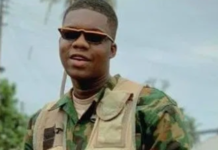