A member of a kidnappers’ gang has been arrested after posing as Aliko Dangote on facebook to lure a beauty queen and daughter of the Special Adviser to the Kwara State Governor on Political Matters, Alhaji Usman Bibire, Saadat from Ilorin to Delta State.

The kidnappers who were said to be students of Delta State Polytechnics, Ozoro, had opened a facebook account with Africa’s richest man, Dangote’s name and photo to dupe unsuspecting members of the public.

The 20-year-old on November 6, fell victim to them when she left Ilorin for Lagos, and later to Delta State after she was made to believe that she had been made a brand ambassador of Dangote Noodles.

On arrival, she was abducted, and held captive for two weeks during which the abductors made a N20m demand from her politician father (pictured with his daughters). 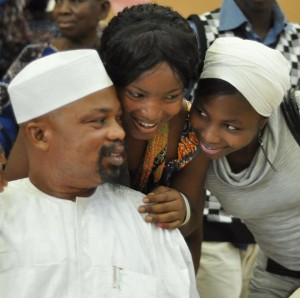 However, on November 20, the Lagos State Police Command where the incident was reported to, secured the release of Saadat after the Special Anti-robbery Squad travelled down to Ozoro.

Parading one of them, Patrick Ifada (pictured below) yesterday, Commissioner of Police, Kayode Aderanti, said a massive manhunt was launched to rescue the victim and apprehend the kidnappers.

Ifada, 23, explained his role in the kidnap saga: “I accepted to join the gang because of the money involved. We opened a fake Facebook account pretending to be Alhaji Aliko Dangote and we convinced her to come over to Delta State to meet the businessman.

“At first, our ransom was N20 million. When they were not forthcoming with the money, we brought it down to N15 million and then N10 million. I was the one staying with the victim in our hideout.

“We were using the quarters of one of our members, Destiny. We are five in number and I was promised a huge sum.

“Other gang members are Destiny, Marcus Omajuwa, Ugada and Chuka. We are all students of Delta State Polytechnic, Ozoro, ND 1. I was studying Computer Science.

“She was in our hideout for about two weeks. We asked the Special Adviser to pay the ransom into a Malaysian account that one Fred helped us to set up.

“None of us raped her. Destiny told us we were only going to make money from her family, and not to assault her.

“We were feeding her. We gave her fast foods, Eba and Indomie. She was kept in Onitsha Street, Ozoro, Delta State. It was inside a private school hostel.”