OZO Engineer Patrick Mba is the chairman of Enugu People Assembly (EPA), and a chieftain of the Peoples Democratic Party. In this interview with Abiola Osundiya of orijoreporter, he speaks about the political crisis in PDP among other issues.

Sir let’s start by getting to know you?

Are you sure you don’t know me (laughs). Well my name is OZO, Engineer Patrick Mba. I am the chairman of (EPA) Enugu People Assembly, I am also a chieftain of the PDP.

Can we get an insight into the resume of EPA that is Enugu People Assembly?

Enugu people Assembly is a mirror of the Enugu people as a micro Nigeria society. We know Enugu as a city and State has been and still is an economy contributor in Nigeria. So the richness of the Enugu mind, his creativity and polity is what EPA is about. And I must add that we have been a resounding voice in the politics of Enugu State. We organized a fasting and prayer sessions for Gov. Chime during his protracted absence from the State. And when it seemed apparent that he was going to be unavoidably absent for a long time, we wrote the Enugu State House of Assembly that his Deputy be made Acting Governor.

What more should we expect from EPA?

As you have just witnessed, we have just given our patron HRH EZE PATENEH, a prototype of a coal stove produced by a son of the soil. This is in preparation of an economic summit that is in the pipeline. EPA in partnership with Enugu State Government is putting together an economic summit, which is aimed at showcasing the potentials Enugu is endowed with. What about the countless cashew trees, which translate to cashew nuts as export products, Enugu rice which has been proven to be more nutritious.

Recently Lagos State Governor Raji Fashola deported some Igbo destitute and later apologized following the criticism that greeted the deportation by some Igbo Leaders. What is your take on this?

The Governor did call to apologize only that I never believed a person so much at wig with the law can make such a big mistake. Is he saying the Yorubas alone developed the west? In fact the Yorubas did little at that. Does he not travel? If the Yorubas are that good at developing, why is Ibadan still like that or can you compare Ibadan to Aba? Is Onitsha comparable to Abeokuta? Lagos was developed with the Federal’s purse. Can Fashola say that all Igbos should stop paying tax for one month and let’s see what will happen to Lagos, let Igbos close up in business districts in Lagos and let’s see the outcome? Of course we see what happens in Lagos during Christmas and New Year break.

So I think Fashola should do more than apologize. Carter Bridge was not built with Cocoa money, Third Mainland was not built with Coca money; they were built with Oil money and Lagos is not an Oil producing State. Is Akure more developed than Enugu? Igbo people by nature migrate a lot. It is just that Yoruba leaders do not travel enough they will see that the Igbos are everywhere and not just Lagos. So I think that our leaders should know what they say.

As a PDP Chieftain, what is your assessment of the current Crisis in PDP?

Last month I was on Channels television as a guest on their early morning programme “Sunrise” where I said that there is no “Crisis” in PDP but just some rebels, naïve rebels so to say. Because if you know it takes to be a registered party then you know it takes more than mere mouth declaration to have the wheels of a political party. It just likes me coming out to say I am the president of Nigeria. Let us remember that all the people at one time or the other that have fought to be the president of Nigeria had always failed and die in the course. It is God that gives dominion.

I believe they should be punished to deter others from taken such foolish step. If they want to form a new party then Good luck to them. Some have done that in the past, they have ended up begging back. 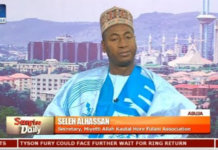