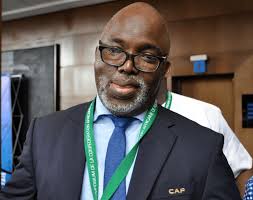 Pinnick’s appointment followed the vacation of the position by erstwhile President of the Ghana Football Association Kwesi Nyantakyi after the latter resigned from office in June on account of an undercover exposition of corrupt practices in the GFA.

In a letter to the members of the confederation, which was signed by its Secretary General, Amr Fahmy, CAF announced that Pinnick’s appointment would be ratified at the continental body’s next Executive Committee meeting in September.

“This decision is immediately applicable, in accordance with article 27 para. 2 of the Statutes, which will be ratified by the Executive Committee in its session scheduled on the 27 and 28 of September 2018.

“We thank you for kindly taking note.”

Meanwhile, the former Delta State Commissioner for Sports is entangled in a leadership tussle with Chris Giwa.  The latter resumed at the Glasshouse office of the Nigeria Football Federation in Abuja, as the president of the football body on Monday claiming an order from a Jos High Court had stopped the election which brought Pinnick to office on September 30, 2014 in Warri, Delta State.