A policeman, Sergeant Matthew Oche has been arrested in Lagos over allegation that he killed a motorist, Francis Ebonyi Ogbole travelling for sister’s burial.

Sergeant Oche with force number F/NO-372727, allegedly pushed late Ogbole(pictured) to death after policemen mounting roadblock had stopped the deceased, who was rushing in the wee hours to Iddo Park at Oyingbo to catch a bus to Benue State.

It was said that the deceased had lost his younger sister and was travelling for her burial. Seeing him off to the park in his car were three of his children.

Narrating the unfortunate incident on his social media accounts, one of the deceased’s children, Ogbole Pius said, “Mr. Francis Ebonyi Ogbole was travelling to Benue State for the burial of his junior sister, on his way to the Iddo park, Oyingbo, Lagos State, escorted by his children which makes four people in the car, they were stopped by stop-and-search policemen with metro police van registration number KSF-176 EE”

“The policemen requested for all the necessary papers which he presented, then he was entering his car then a policeman, Sergeant Matthew Oche with force number F/NO-372727, said no he cant leave now cause the back glass of his car is tinted.”

“Mr. Francis however told him that it was because it’s still early and dark, around 5:30a.m, that the glass is not tinted, but the policeman was looking for a way to extort money from him. Out of anger, the policeman pushed him and he fell, broke his head and died instantly.”

However, the suspect has been arrested and currently detained at SCID, Panti, just as murder charges is being filed against him.

featured orijoadmin - August 20, 2022
0
Adetokunbo Fabamwo, the chief medical director of the Lagos State University Teaching Hospital (LASUTH), says 35 per cent of nurses in the hospital have...

NEWS orijoadmin - August 20, 2022
0
Osun State Governor, Adegboyega Oyetola, has declared next week Monday as public holiday in commemoration of this year’s annual ‘ISESE Day’ celebration.  This was contained in... 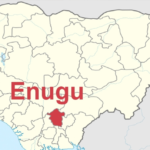 NEWS orijoadmin - August 20, 2022
0
An Enugu State resident, Pius Okoro, has sued the Uzo-Uwani Local Government Area (LGA) of the state and its officials for the alleged murder...
Advertisement