Home featured Why I left Nigeria in the 80’s – Oluwo

The Oluwo of Iwo, Oba Abdulrosheed Akanbi, has told of the motivation behind his relocation from Nigeria to foreign land in the eighties.

READ ALSO: Lady whose friends announced her death arrested with boyfriend after resurfacing

Oba Akanbi made this disclosure when he received a team of Osun State government officials led by the Commissioner for Education, Mr. Folorunsho Oladoyin, who were on an official visit to Iwo to inspect proposed permanent site of the newly-approved Federal College of Education, on Tuesday.

A statement the Press Secretary to the Oluwo, Alli Ibrahim, released, said while the monarch was lavishing praise on the anti-corruption fight of the ruling All Progressives Congress, he attributed his relocation abroad in the eighties to alleged corrupt leaders calling the shots.

His word: “I left Nigeria in the 1980s for greener pasture because of corrupt leaders presiding over our affairs. I’m happy that the new hope is here and so elated to be part of the promising structure.

“For now, the progressives should continue ruling. There is a public awareness against corruption.” 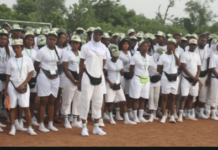 NCC explains how firms can link SIMs with NIN