A woman has been arrested in Lagos for biting off her neighbour’s nipple and swallowed it.

The suspect, Mrs. Bola Olowolagba was arraigned before an Ejigbo magistrate court after biting off her neighbour’s nipple and swallowed it.

The victim, Mrs. Adelowo Taiwo and the suspect reside at I6 Oduduwa Crescent at Shasha in Alimosho Local Government Area where the incident happened.
.
Mrs. Taiwo, a mother-of-four, told the court that trouble started between her and Mrs. Olowolagaba after the latter held a party and littered the compound with dirts and failed to clean up the mess even after her attention was drawn to it several times.

The victim said she took it upon herself to do the cleaning. And while she was doing the cleaning, they were verbally attacking each other which degenerated into fight.

She said at one point, Mrs. Olowolagaba started fighting with her teeth, bit her shoulder and went for her breast where she bit off her nipple, and swallowed it.

She said she was rushed to Igando General Hospital and the matter was reported to the Police at Shasha division as Olowolagba was arrested and charged to court for assault.

The presiding Magistrate, Mrs. J.O.E Adeyemi, granted her bail in the sum of N50, 000 with two sureties in like sum, and adjourned the case to 21 September 2015.
The suspect who pleaded not guilty and faces jail term if convicted of the allegation that she bit off her neighbour’s nipple and swallowed it, was remanded in prison custody at Kirikiri pending when she will perfect her bail. 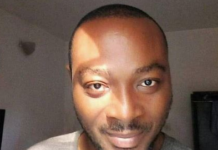