A study has discovered that women who fake orgasms are more likely to cheat on their partners.

It also revealed women fake an orgasm in almost a fifth of their sexual encounters in an attempt to spare their partners’ feelings.

They wanted to discover whether people who are sexually happy in their relationship are more likely to stay faithful.

The students interviewed had sex on average three times a week and the women have orgasm 61 per cent of the time, while the men reach orgasm during 70 per cent of their sexual encounters.

The scientists established women fake orgasms far more often than men do – they do so 18 per cent of the times they have sex while men only fake it in one in 20 times.

Almost one in six of the women questioned admitted they had cheated on their partner.

The figure was even higher for men, with more than a quarter – 26 per cent – admitting being unfaithful.

Researchers found men and women who faked orgasms were far more likely to be unfaithful.

Orgasm frequency, on the other hand, had no impact on infidelity.

The women who had the most orgasms cheated no less or more than women whose climaxes were more hit and miss.

It also found that men were more likely to stay with a partner who has orgasm consistently.

Dr. Justin Lehmiller, a psychologist from Harvard University who analysed the findings, said: ‘the more orgasms a woman had faked, the more likely she was to have cheated previously and the greater her likelihood of cheating again.

‘Fake orgasms say a lot more about a woman’s odds of staying faithful than actual orgasms.’

The new findings follow British research from sex toy firm Lovehoney which showed 68 per cent of women had admitted faking an orgasm, as had 28 per cent of men.

Sex and relationship expert Tracey Cox said the majority of women have faked orgasm at some point in their lives because of the difficulty of climaxing purely through penetrative sex.

She said: ‘One theory might be that since women fake it more often than men do, perhaps they feel obliged to provide “evidence” that they’re enjoying themselves?’ 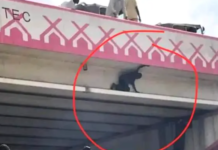 Teenager on Kano bridge to commit suicide over Buhari

Teenager kills self in Kwara for failing exam

NEWS orijoadmin - August 8, 2022
0
The Lagos House of Assembly has begun probing the 20 local governments and 37 local government development areas (LCDAs) to justify the accountability of...

featured orijoadmin - August 8, 2022
0
President Muhammadu Buhari has called on leaders of Igbo extraction to make known those behind the recent killings of some citizens of Niger Republic in...
Advertisement