Popular Actress, Laide Bakare’s Husband, Muttairu Babatunde Orilowo, is on the run. Orilowo, 47, has been declared wanted by the Economic and Financial Crimes Commission (EFCC) in connection with a case of criminal conspiracy, obtaining money under false pretences and stealing, According to E247Mag. 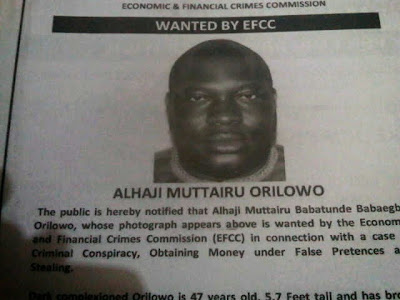 In a notice to the public, the EFCC noted: “The public is hereby notified that Alhaji Muttairu Babatunde Babaegbe Orilowo, whose photograph appears above, is wanted by the Economic and Financial Crimes Commission (EFCC) in connection with a case of Criminal Conspiracy, Obtaining Money under False Pretences and Stealing.
“Dark complexioned Orilowo is 47 years old, 5.7 Feet tall and has brown eyes. He speaks English and Yoruba fluently.  His last known address is No. 1 Otunba Adeniyi Street, Papa-Epe, Lagos.
Though, close friends hinted Orilowo may have sneaked out of the country to Canada to escape arrest, the declaration by the EFCC was due to one business  that went awry. They are confident that he will return soon and clear all the grey areas involving a  top telecom company and a leading bank. Orilowo has his hands in many pies including property, dredging, and oil and gas with huge investment scattered over  Ajah, Ibeju- Lekki, Epe axis.
Until last year, Laide was married to her US-based ex-hubby, Olumide Okunfulure, who she claimed was the father of her first born, a girl.
But in a shocking twist of fate, she started dating Orilowo and few months after she got pregnant for the businessman who spoilt her silly with choice cars and furnished apartments,  now wanted by the EFCC. Okunfulure had in an interview claimed Laide remained his wife due to the process they went through to formalise the marriage that qualified her to obtain her current US citizen’s status on his name and he was the father of the baby she was expecting.
Eventually, the embattled actress travelled to the United States of America where she delivered her second child, a boy, christened ‘Oluwadamilare, Mishal Orilowo.’
On several social media, she flaunted her pictures and her new baby while she showed pictures of herself and Orilowo on spending sprees and  honeymoon to close friends. Amidst the controversy over the true paternity of her baby, she said:  “It’s only a woman that knows who the father of her baby is.” Her marriage to Okunfulure was dissolved on the pages of magazines and she started to co-habit with the money-man. To the chagrin of all, an Islamic marriage rite, Nikkhah was conducted to formalize their union as husband and wife.
The baby’s christening party was well-attended with famous Fuji Star, Malaika on the bandstand. Orilowo also pulled all the stops to ensure the premiere of her film, Jejere was a huge success with Fuji Lord, K1 de Ultimate and pop singer, 9ICE entertaining guests.
Orilowo is a fan of many Fuji musicians who sing his praise to high heavens. He’s fondly referred to as ATM in Lagos’ social circle.