The residents association of Dobys Haven Estate in Ajah, Lagos, has accused the Executive Producer of Crime Fighters, a defunct television programme, Chief Aisha Tosan, of hurling life threats at fellow residents and using police to harass and intimidate them.

The association at a press briefing in the estate said Chief Tosan, the pioneer chairman of the estate’s association, has been using her relationship with police hierarchy to send jitters in the estate, ordering the arrest of respected residents on frivolous and trumped up claims.

It was said that Chief Tosan(pictured) whose ‘Crime Fighters’ in which small fry suspected criminals were paraded on television went under immediately after Tafa Balogun’s exit as the Inspector General, following public backlash against it, citing the right to be presumed innocent until proven guilty, had once ordered the arrest of a lady in the estate over petty issue involving children.

The estate association said the latest victim of ‘a reign of terror’ conducted by Chief Tosan at Dobys Haven Estate is Greg Odutayo. He was arrested by the police on a trumped up claim made by Chief Tosan.

Formerly with NTA, Greg Odutayo(pictured right) is a leading producer / director and the owner and Managing Director of Royal Roots, a television content creation and production company with subsidiaries in Ghana and South Africa.

Greg Odutayo and Royal Roots have one of the widest ranges of content currently being exported from Africa, among them Bella’s Place, My Mum & I and Edge of Paradise both nominated at the 47th and 50th Monte Carlo Television Festival in Monaco France. He has over sixty staff under his employ.

But last Monday following alleged frivolous petition authored by Chief Tosan, police picked him up for allegedly stealing a 350 KVA generator set belonging to the estate and detained him for 24-hour.

In the petition made available to OrijoReporter, and submitted at Zone 2, Onikan, Chief Tosan claims that Mr. Odutayo who is the first person to take up residence in the estate, and the pioneer secretary of the estate’s residents association stole the estate’s generator set.

Consequently, he was arrested in his office at Ikeja, and detained till the following day as several appeals for bail on self-recognition ground allegedly fell on Zone 2 Police Public Relations Officer, CSP Adebowale Lawal’s deaf ears.

While Mr. Odutayo was in detention, the association said Chief Tosan pranced around the estate, boasting that she had put him behind bar, and also ordered the withdrawal of spy policemen from the estate.

It was alleged that Chief Tosan has a retinue of police escort including a driver despite the fact that she was never a police office.

But rising up in defence of the victim of state oppression, and alleged impunity enjoyed by the petitioner, the estate residents association in a written response to her petition forwarded to police authority wondered why the Crime Fighter’s presenter would accuse Mr. Odutayo of stealing the generator set after he paid N2m for it about 18 months ago.

It said Chief Tosan was Chairman of the estate association then and she supervised the spending of the N2m, which was used to buy a 13 KVA generator set that is currently being used to power common areas like streetlight and water borehole.

The statement read in part: “There was an Estate Resolution to sell the Estate Generator to any willing buyer at a resident association meeting. This decision was prompted by the high maintenance cost of the generator.

“The exco members were mandated to dispose of the generator accordingly. Subsequently, at another meeting of the Estate, the EXCO presented amongst others the cheering news that the generator has been sold for the sum of N2.0million.

“The sale decision was applauded by members present at the meeting, especially as the proceeds was going to be utilized in the execution of certain urgent projects in the Estate.

“Let us reiterate that it was the collective decision of the Estate Association to dispose the Estate Generator to any ready and willing buyer including members. May we also state here that there were two quotes received for the sale of the generator from residents, the quotes were: N1.7Million naira by another resident and N2 Million naira by the final buyer.

“As stated earlier, Mr. Greg Odutayo was one of the first occupant and a House owner in the Estate. He has served the Estate in the past in various capacity meritoriously and without blemish. Every member of the Estate can readily attest to this and he is well respected in the community.”

Sharing their ordeals in the hand of their tormentor with newsmen, the incumbent chairman of the residents association of Dobys Haven Estate, an estate with a large population of business owners and captains of industry, including celebrities like Nollywood actress, Stephanie Okereke, Mr. Lakin Soleye, said Chief Tosan is causing fear among residents, and her withdrawal of spy policemen who were being paid by the association to provide security is a threat to life and properties.

“This is a grand abuse of power and affiliation with police. It is completely unacceptable that Odutayo was picked up. It is absurd that 18 months after the generator set was sold to him, she wrote to the police that it suddenly disappeared.

“Nobody is superior to anybody in this estate. Funny enough the houses were built in the same way.

“Greg Odutayo is one of the respected and senior members of the estate, and we are saying she cannot do that to him. It means anybody can be arrested for anything. Zone 2 is in Onikan and we have Ajah Police Station here. How come she didn’t report the case at Ajah. This is not the police the Inspector General is preaching every day. At every argument she brings in police.”

“She used the association’s letterhead to write a frivolous petition that was not authorised by the exco in her personal capacity The Inspector General of Police must call her to order. If she cannot live with the civilians, she should go to the barrack. She said she doesn’t care about our own women, and children, when we told her that by withdrawing the spy police she was exposing us to armed robbery attacks. We pay their salaries as an association.”

On his part, her victim, Odutayo said he will seek all legal means to seek redress of an infringement of his right to fair hearing by the police, and the harm he suffered from the defamation of character by the self-styled chief.

“The police PRO said she has the right to use the estate’s letterhead to write them in her personal capacity. She believes she wields a lot of influence among police hierarchy and has to bully everybody, i intend to pursue the matter to a logical conclusion.”

When asked for her comment on the allegation of terrorising her neighbours in Dobys Haven Estate, and her ‘arrest’ of Greg Odutayo, the producer of defunct Crime Fighters, Chief Aisha Tosan said:”I have the right to make an allegation or do you want me to take law into my hand?”

She promised to send her rejoinder. 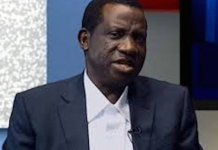